Skip to content
Get out with Sprout. Uncategorized March 25, 2018 3 Minutes

If I ever disappear, I will probably be in one of two places: either, under the patio having driven The Dancing Queen to despair at my constant railing against what I see as important stuff, or, and hopefully more likely, at Watergate Bay. 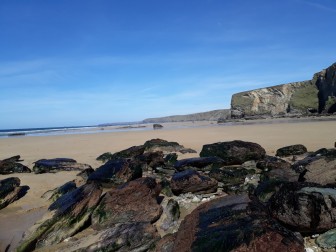 We are just back from our annual visit to what is my favourite hotel, I don’t say that lightly, because I have been very lucky to stay at some fabulous hotels – Grenadine Lodge in Dalyan, Turkey and Muxima in Aljezur, Portugal also being amongst my favourites.

But I don’t want this to just be about me telling you why to go to such and such a hotel, because frankly, you can probably make your own mind up about where you want to go. And I want to be able to go when I want and not find them fully booked.

So I’m going to tell you about my second favourite walk at Watergate Bay – it’s the most amazing Cornish bay as well as a hotel.

The walk itself changes every single time you do it, and the distance varies each time also, you can do the walk in the morning and do a completely different walk in the afternoon. In fact, being Cornwall, you can have four seasons in one walk.

So, the walk is on the 2 mile sandy beach, if the tide is in, it’s a very short and wet walk, but the tide soon goes out and exposes the golden sand. That’s when families start appearing with cricket equipment and buckets and spades and dogs, dogs being allowed on the beach all year round is fabulous- it never appears to get terribly busy – but we only go between November and March, so, as ever, I’m not a terribly reliable witness.

If the tide is out and you are going to do the full circle of the beach, you have to decide whether to walk into the prevailing wind first or last. I tend to turn left from the ramp and walk to the bottom of the beach with the wind behind me and then walk all the way to the other end into the wind to get the wind behind me for the last bit back to the ramp. But be a maverick, do as you wish, be a leader or be a follower.

Don’t forget, followship is as important as leadership. I went to see Ant Middleton (Him off the telly and out of the SBS) give a talk this week, what an inspiring man. I went with my pal Jon, who questioned me afterwards as to why I liked Ant Middleton when I normally baulk against over-confidence and overt Alpha Male-ism. The answer is, I baulk against people who think they are Alpha-Males and have nothing to back it up, whereas real Alpha Males command respect by leading by example and admitting to not being perfect, but work at being perfect. That’s what I think anyway. What that’s got to do with my second favourite walk at Watergate Bay is anyone’s guess.

I love beaches, the sea is a never ending source of calm for me, even when it is rough, I see patterns and hear noises that I find soothing. The cliffs at Watergate Bay are rugged, and crumbling and home to birds and, in the Winter, icicles. The rock pools that appear provide wonderful swimming pools for dogs, there are caves to shelter from the wind and spray and make echoing noises in.

There is a plaque on the wall of the cliff commemorating the crew and people who attempted the rescue of a Liberator aircraft in December 1943, which gives the walk a contemplative feel. It’s hard not to feel small and a bit inconsequential when you are dwarfed by giant cliffs and historic heroes.

As I age, I realise I’m turning into my Mother, which I hope isn’t as weird as it sounds, I mean I appreciate the colours and sounds of nature much more, I always remember her telling me to stop and watch nature whenever I could, as it’s a constantly moving picture of colours which you would never think possible. So it was great to have her with us on this trip and to be able to tell her that I was starting to understand her now. To which she responded that she hoped to understand me one day too. But I was speaking to her in Dutch.

Time flies, I’ve got to go and see why The Dancing Queen is digging up the patio.

Go to Watergate Bay, it’s beautiful and the hotel is amazing – except in the third week of March, I hear its dreadful then – which just might be when we go.

Those of you who have managed to follow any of this blog, well done, but also, you might be asking why the beach is only my second favourite walk. Obvious really, my favourite is from my room to breakfast. Where I create a self-made 3 tiered waffle extravaganza, layered with bacon and maple syrup.

Published by Get out with Sprout.

I'm a gardener, Sprout's my dog. We spend most our time outside, working, playing or walking. View all posts by Get out with Sprout.